Consider a Tub to Shower Conversion

Is your older tub collecting dust and dirt? Are you or a senior relative starting to experience mobility issues in the bath area? If this is the case, a tub-to-shower conversion could be exactly what your bathroom needs. The following is a complete guide that will take you through everything one would need to know about converting a bathtub to a shower, so that you can make the right decision for your home and your future. 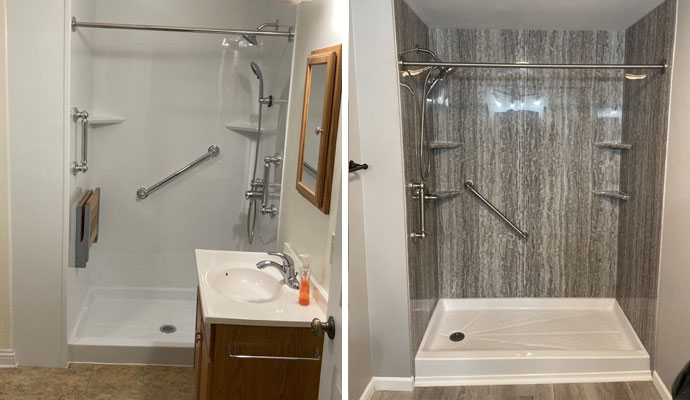 REASONS TO CONSIDER A TUB TO SHOWER CONVERSION

The CDC has reported that the bathroom is the most dangerous room in your home. A study from back in 2008 shows that approximately 21.8 million people over the age of 18 sustained bathroom injuries that year alone.

Someone who misjudges when they are stepping over the wall of their tub can run the risk of tripping and falling. Slipping can also happen much more easily in a bathtub than in a shower. A tub-to-shower conversion can help eliminate the potential risk of injury and give the homeowner peace of mind while they are bathing.

A lot of our customers at Mt. Pleasant Window & Remodeling Co. generally prefer showers to bathtubs because they are significantly easier to clean than a tub. With a beautiful new shower, no longer will the customer be on their hands and knees scrubbing away all day at soap scum.

THE “ILLUSION” OF ADDITIONAL SPACE

The funny trick about a tub-to-shower conversion is that it can make the whole bathroom look bigger! A conversion will also give you more in-shower floor area than a bathtub. While the actual space in your bathroom will remain the exact same (unless you want to change that), you’ll feel like you have more room once your new shower is installed!

According to Remodeling Magazine, an upscale bathroom remodel can add up to $34,000 to a home’s resale value. On average, a homeowner that remodels a bathroom recovers around 56% of the remodel cost once their home is sold. A win-win scenario if you are looking to sell or stay in your home long term!

THINGS TO CONSIDER BEFORE GETTING A TUB-TO-SHOWER CONVERSION -
HOW DO I PICK A CONTRACTOR? 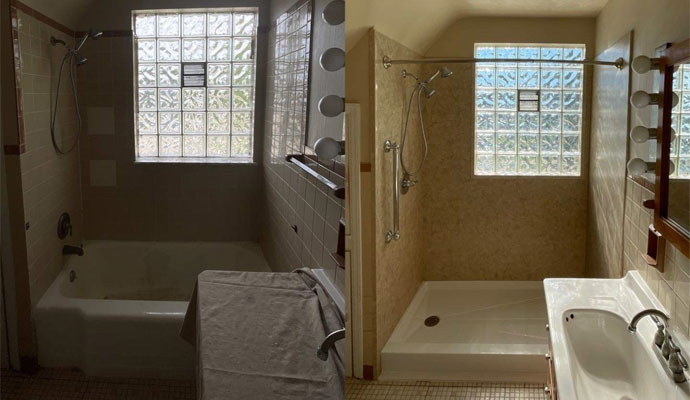 Once you’re ready to convert your tub to a shower, the most important decision you can make is who you will hire to do the job. Mt. Pleasant Window & Remodeling Co. recommends asking the following questions to any contractor you are thinking about hiring:

DOES A TUB-TO-SHOWER CONVERSION MAKE SENSE FOR YOUR HOME?

How many bathtubs are currently in your home? If you are thinking of selling your home in the future, it’s a great idea to keep at least one bathtub, as they tend to appeal to more homebuyers, especially ones with small children or planning on starting a family. But, as long as one bathtub remains in your home, you should be able to do a tub-to-shower conversion without your home value taking a slip!

Looking for more information? Check out our completed jobs photos for our latest bath remodels, read through some of our FAQs or stop by our showroom in Export, PA to get more ideas for your project. Mt. Pleasant Window & Remodeling Co. are here to help you make the bathroom of your dreams a reality. Contact us today for a free estimate!

Read What Our Customers Say

It was a pleasure working with Joe G. & Charlie G. The windows look great and they took time to demo them. Will recommend to others for future projects!

Darrell installed a new glass window and sweep in our fiberglass door today. He did an excellent job and was courteous and well experienced to do the job.

Darrell and April really helped me out. I bought new windows from Mt. Pleasant Window and they did a great install. However, one arrived broken from delivery.

What Our Clients Are Saying

Looking for a price? Get a no cost, no obligation!